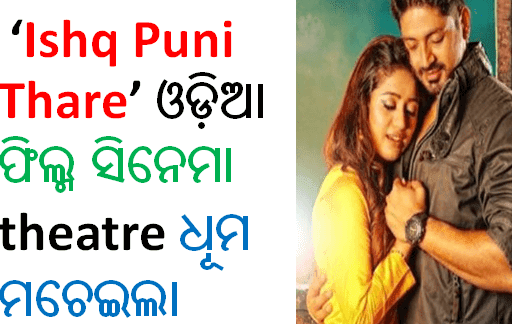 The just-released film, ‘Ishq Puni Thare’ talks about love. Jointly produced under the banner of Tarang Cine Productions and Ratna Films, Arindam and Elina Samantaray have been paired for the second time to recreate the magic of love. Two films old Jyotee Das has directed the film while Prem Anand has scored the music.
Although the title of the film sounds similar to that of our 2015 film, ‘Ishq Tu Hi Tu,’ it is not a sequel. After finalizing the story and script, we thought Elina suited the character best. We decided on the name only later on.

Produced under the banner of Tarang Cine Products, Ishq Puni Thare has been directed by Jyoti Das.
While the songs of the film have created raze among the fans, Arindam hoped that the film will be appreciated by the cine lovers in the state.

“I hope the film will be appreciated by the people. After so many days, I got a chance to do an action movie. The film has five action scenes and I hope the audience will enjoy it,” said Arindam.
Tarang had introduced Elina Samanatray opposite Arindam in Ishq Tu Hi Tu directed by Tapas Saragharia.

Sakhi: A beautiful music video on ‘Raja’ festival of Odisha