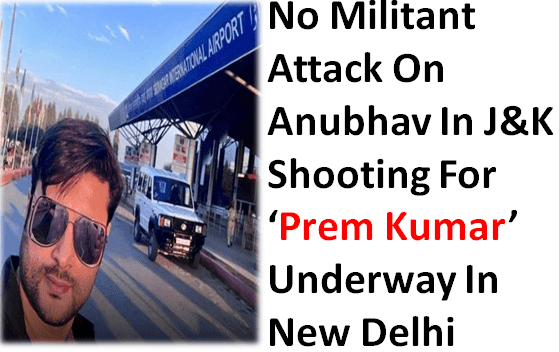 Director of ‘Prem Kumar’ Tapas Sargharia denied any militant attack on Anubhav Mohanty and his team members in Jammu and Kashmir, as being reported by a section of media here.
“While one team, including Anubhav and me, left for Jammu Airport to board a flight for New Delhi, another drove to the railway station at Jammu. They were to board a train for Bhubaneswar.

They got stuck in the tight security check, which was put in place following yesterday’s militant attack, near Baramulla while on their way to the railway station. This has been misinterpreted by several media houses,” said the director who is currently busy shooting a scene with Anubhav in New Delhi.
Three terrorists of pro-Pakistan Jaish-e-Muhammad were killed and 12 security personnel, including three officers, were injured on Thursday in an encounter in Jammu and Kashmir’s Reasi district, a day after they fired on a police party here and escaped.

Anubhav and Shivani Sangeeta shot for a song in the valley. “Shooting in Kashmir is not easy. One has to go through 10 rounds of checking at the airport. Since Anubhav got injured while shooting for an action scene in April, the film has been facing many difficulties. But, it would be a perfect entertainer during Durga Puja,” said Sargharia.
Produced under the banner of Tarang Cine Productions, Anubhav has been cast opposite Tamanna and Shivani Sangeeta in the film.
Not revealing much about the characters and the storyline, Sargharia said, “Shivani is the main female lead. Anubhav’s character is very interesting. He is playing an aggressive as well as a humorous character, a salesman for all. One has to watch the film to know his real character,” he said before signing off.

Sakhi: A beautiful music video on ‘Raja’ festival of Odisha