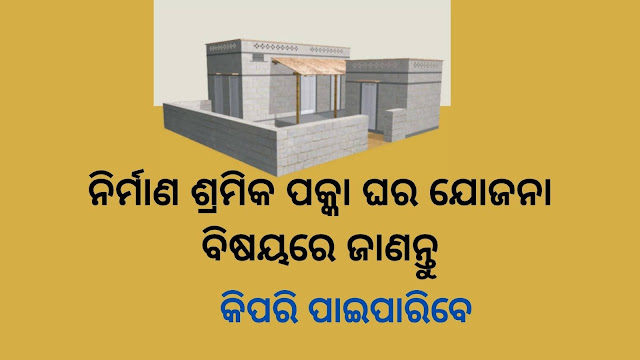 Nirman Shramik Pucca Ghar Yojana in Odisha:-
Many schemes have been implemented by the state government of Odisha for the development of the people. Most of these programs have been targeted towards bringing about improvement in the lives of those who belong to the poor strata of life. The announcement of the Nirman Shramik Pucca Ghar Yojana was done for providing permanent homes to that associated construction industry.

Eligibility criteria of the scheme:-
✔️ Must be a construction worker – The implementation of the scheme has not been done for just any group. To get the benefits of the program, the candidate will have to be associated with the construction industry.
✔️ Must belong to the BPL category – The poor construction workers do not have an adequate amount of money to make their own permanent homes. Only the poor will be given the benefit of the scheme. Thus, the workers must belong to the BPL group.
✔️ Must be registered under OBOCWWB – Only those construction workers who are registered with the Odisha Building & Odisha Construction Worker Welfare Board for a time span of 3 years will get the chance to submit the application form. It was 5 years before the amendments were made.
✔️ Must not possess a pucca home – As per the rules, only those candidates will be allowed to submit the application who does not have access to permanent homes already.

Important documents required:-
✔️ Residential proof documents – As the welfare scheme will only allow those construction workers to enroll for acquiring their permanent home who have been living in the state, the production of residential proof is a must. The construction workers, originating from Odisha but stationed in other states will also be allowed to register.
✔️ Aadhar card – All identification-related verifications are a must. For that, each enrolling candidate will have to provide a photocopy of the Aadhar Card.
✔️ BPL certificate – The main target of the scheme was to provide the poor and needy construction workers with their permanent homes. These workers mainly belong to the poor strata and must possess the BPL certificate.
✔️ OBOCWWB registration certificate – Only those candidates will be able to register for the benefits of the scheme who have been registered with the Odisha Building & Odisha Construction Worker Welfare Board. A photocopy of this certificate will be required with the registration form.

Registration process:-
✔️The application form is available at no extra charges from the office of the District Labour Officer.
Filling the form is a must if the construction workers are interested in acquiring the various benefits under the Nirman Shramik Pucca Ghar Yojana.
✔️ Once the candidate has the form, it must be filled carefully with all the information. For supporting the claims made in the form, the required documents need to be attached to the form.
✔️ Once this has been done, the form must be submitted. It will then be verified by the officers.
All candidates who will be found eligible will be notified and the grant will be provided accordingly.

Funds for the scheme:-
The scheme has been announced and implemented by the state. Thus, all monetary requirements will be met by the state authority. It has been estimated that a total of 1000 crores will be required for the completion of the primary phases of the scheme. This huge sum of money will be collected by the state. The cess that is generated from the construction of state government buildings will be used to fund the scheme. Till now, an amount of Rs. 750 crores have been gathered.