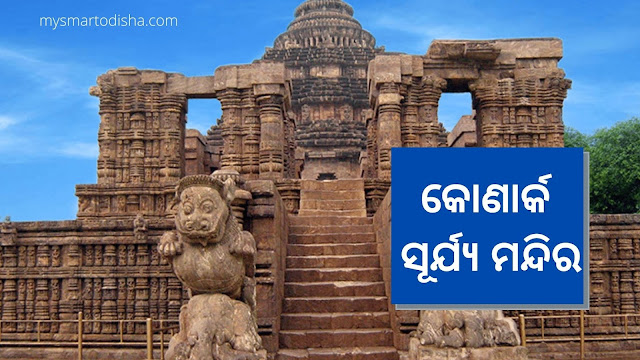 Konark Sun Temple (Konark Surya Mandir) is a 13th-century CE Sun Temple at Konark about 35 kilometers (22 mi) northeast from Puri on the coastline of Odisha, India. The temple is attributed to king Narasimhadeva I of the Eastern Ganga Dynasty about 1250 CE.

Dedicated to the Hindu Sun God Surya, what remains of the temple complex has the appearance of a 100-foot (30 m) high chariot with immense wheels and horses, all carved from stone. Once over 200 feet (61 m) high, much of the temple is now in ruins, in particular, the large shikara tower over the sanctuary; at one time this rose much higher than the mandapa that remains. The structures and elements that have survived are famed for their intricate artwork, iconography, and themes, including erotic kama and mithuna scenes. Also called the Surya Devalaya, it is a classic illustration of the Odisha style of Architecture or Kalinga Architecture.

The cause of the destruction of the Konark temple is unclear and remains a source of controversy. Theories range from natural damage to deliberate destruction of the temple in the course of being sacked several times by Muslim armies between the 15th and 17th centuries. This temple was called the “Black Pagoda” in European sailor accounts as early as 1676 because its great tower appeared black. Similarly, the Jagannath Temple in Puri was called the “White Pagoda”. Both temples served as important landmarks for sailors in the Bay of Bengal. The temple that exists today was partially restored by the conservation efforts of British India-era archaeological teams. Declared a UNESCO world heritage site in 1984, it remains a major pilgrimage site for Hindus, who gather here every year for the Chandrabhaga Mela around the month of February. 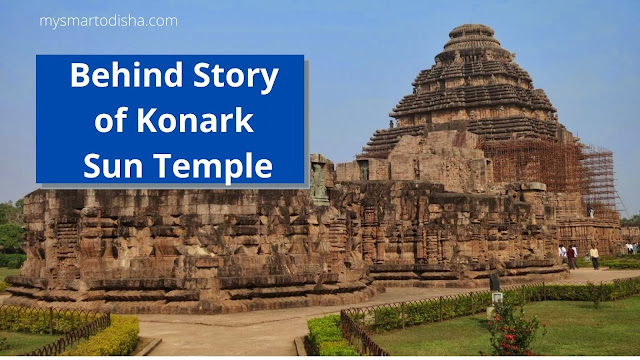 The condition of the soil where the temple was to be erected, originally was so bad, that the chief architect, Bishu Maharana, who was entrusted with the work, became very much upset. But when there was no other way but to build on the same place on account of its sanctity, he with great difficulty managed to carry on the work. There was a contract between the king and workers, that no one will be allowed to go away until the whole work was completed.

Anyway, the construction was going on, and it was nearing its completion, suddenly they were to face difficulty in fixing up the Kalasa(finial) in its proper position. In the meantime, the chief architect’s son ‘Dharmapada’ came to see his father, as he was away from home for a long time. Dharmapada was born a month after his father’s departure, and twelve years had gone by. He proceeded to the site to meet his father and saw that the leading builders were beset with certain problems. Though Bishu was glad to see his son, he could not conceal the fact of his not being able to put the Kalasa properly. He said, ‘my boy, though the construction work is almost complete, we are experiencing some difficulties now inputting the final.

If we fail to do it within a reasonable time, the king will detach our heads from our body’. On hearing this the boy immediately got up at the top and discovered something wrong in the work. He immediately rectified the defect and made the Kalasa to go into its proper position. The work was done but the masons were still thinking of their fate, that if the king comes to know all about this, he will certainly think that the masons were not doing their job properly, which a little boy had done in such a short time. The boy was very much shocked and just to hush up the matter, got up, and committed suicide, from the top. Many such stories whose accuracy, it is doubtful to assert, are in vogue.

Had he suddenly come under the spell of an uncontrollable ecstasy and a desire to be lost in the infinite after having fulfilled his life’s mission? The popular legend says that he shirked the possibility of posterity crediting him for an achievement that was truly due to his father and his kinsmen.

The Konark Sun Temple is located in an eponymous village (now NAC Area) about 35 kilometers (22 mi) northeast of Puri and 65 kilometers (40 mi) southeast of Bhubaneswar on the Bay of Bengal coastline in the Indian state of Odisha. The nearest airport is Bhubaneswar airport. Both Puri and Bhubaneswar are major railway hubs connected by Indian Railways’ Southeastern services.

Konarak is mentioned in ancient Hindu texts having mythological significance like the Puranas. Konaditya (Konarak) was believed to be the most sacred place for the worship of Surya in the entire Odisha region. In gratitude for healing his skin ailment, Samba, one of the gods Krishna’s many sons, erected a temple in the honor of Surya. He even brought some Magi (sun-worshippers) from Persia, as the local Brahmanas (the priestly class among the Hindus) refused to worship Surya’s image. This story was associated with a sun temple in north-western India but was shifted to Konarak in order ‘to enhance the sanctity of the new center by making it the site of Samba’s original temple’ (Mitra, 10). Konarak, over time, had emerged as an important site for sun worship and hence, a mythological background was considered necessary to increase its importance for devotees. 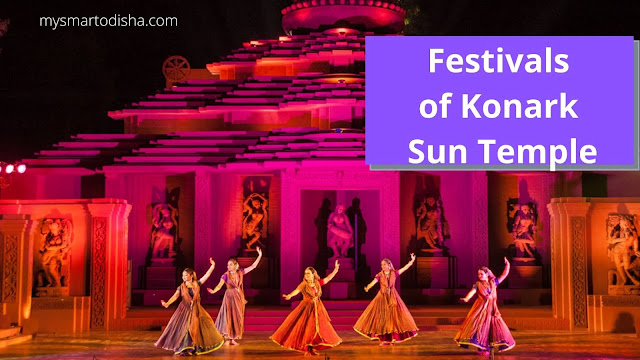 Magha Saptami and Samba Dashami are the two most important festivals of Konark Sun temple. Magha Saptami falls on the 7th day of the bright half of the Hindu month of Magha. The day is also known as Ratha Saptami, which is marked as the birthday of Lord Surya.

Thousands of pilgrims gather to take a holy dip in the Chandrabhaga River every year. However, the river has been reduced to a shallow pond. Besides, a fair is organized on this occasion known as the Chandrabhaga Mela.

Samba Dashami is celebrated on the 10th day of the waxing phase of the moon in Pausha month, as per the traditional Odia calendar.