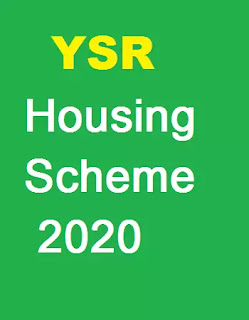 Previously the government was decided to distribute the free houses on Ugadi. But due to the nationwide lockdown because of the coronavirus threat now the government has fixed 8th July 2020 for the distribution.

During the review meeting of the housing scheme with the officials on 2nd June 2020 (Tuesday) chief minister of the Andhra Pradesh state YSR Jagan Mohan Reddy has declared that the houses available in the stock will be distributed on 8th June 2020. Not only this he also directs the officials to clear all the pending dues. The due amount is Rs.1,323 crores for about 3,38,144 houses. CM also told the officials who were present there to assign a day for payments to ensure there should be no payment lapse. 15 lakh new houses will be constructed at the location of Visakhapatnam, Kurnool, and Nellore districts for the people. As per the information these houses contain a bedroom, kitchen, living room, toilet, and veranda without compromising the quality of the construction material.

On 16th June 2020 Tuesday Finance Minister B Rajendra Nath Reddy, Government of Andhra Pradesh has formally introduced the budget of the state for the financial year 2020-2021. In this state budget, major highlights were the allocation of the fund for the twenty-one welfare schemes run on the name of Late YS Rajasekhara Reddy and Chief Minister YS Jagan Mohan Reddy to provide financial help to the needy people. Despite the COVID crises and poor financial condition YSR government given priority to the welfare schemes. This year government has sanctioned Rs 3,691.79 crore for the housing sector.

Chief Minister Mr. Jagan Mohan Reddy on 12th July 2019 has launched YSR Housing Scheme 2020 with the aim to provide house to the poor people of the state not able to afford to build their own house as per his promise made during the election campaign. This scheme is one of the major 9 promises made by Mr. Jagan Mohan Reddy. The scheme is named on his father’s name YS Rajshekhara Reddy. This scheme is known as the NTR housing scheme previously. The scheme was announced during the first State Budget by Finance Minister Mr. B. Rajendranath Reddy. This housing scheme is especially for EWS/ MIG/ LIG category peoples of the state. In this scheme state government is going to regulate YSR Economic Weaker Sections Housing Scheme, PMAY- YSR (Urban) scheme, and PMAY- YSR (Gramin) scheme.

YSR EWS Housing scheme is a state government initiative for Economic weaker section category Citizen of Andhra Pradesh. State Government is going to provide pucca house to all the beneficiaries and for this purpose, Rs.1280 crore is allocated under the state Budget.

PMAY – YSR urban housing is a joint initiative of state and central government to provide pucca house to everyone in the state who belong to the poor, middle-income section, and lower-income groups. This scheme’s main aim is to develop the urban area of the state before 2022. For the successful implementation of the scheme central government of India has sanctioned Rs. 5000 crore and the State government allocated Rs. 1000/- crore.

To apply for the scheme applicant must be a permanent resident of the state, not has their own house or land, and APL/ BPL ration card along with a caste certificate.

On July 8th, 2020 Cabinet Committee on Economic Affairs will launch a new housing scheme named YSR Jagananna Colonies Scheme. Under this scheme, the government is going to provide the land to the beneficiaries along with the documents for the construction of the house. Banks also get instructions from the government to provide financial support to the beneficiaries. For this scheme, approximately 60000 beneficiaries are identified by the authorities and 10000 applications are under consideration.

This scheme has taken into effect by the Kadapa district administration at Pulivendula town in about 255 acres area. 1 to1.5 cent of land is going to allocate along with documents to the beneficiaries by the government of the state. In the district, the authorities have formed 754 layouts with 95,549 plots for allocation and every layout has 10% land for community purposes like parks and playgrounds. Moreover, this development of the land project is taken place on a war footing basis.

Note: We will update the information as disclosed by the Government of the state.