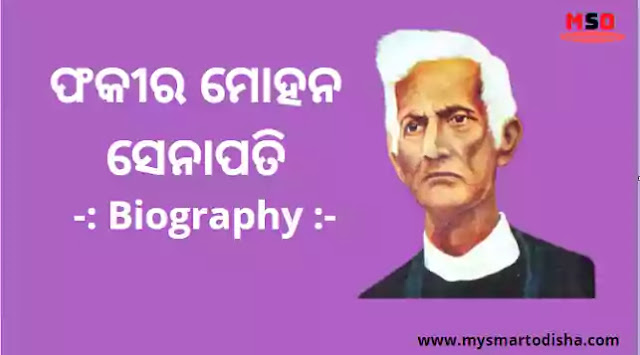 In Odia literature, Fakir Mohan Senapati (13 January 1843 – 14 June 1918) is famous as ‘Katha-Samrat’. Odia is his special identity in story and novel creation.

Fakir Mohan Senapati was born in Mallikashpur village of Baleshwar district of Odisha, on the day of Makar Sankranti, January 13 January 1843. Then it is a strange coincidence that he died on the day of Raja Sankranti on 14 June 1918. He originated in Sankranti and Tirobhava also in Sankranti. For this reason, Fakirmohan has become known in the Oriya literature-world as “Sankranti-Purush“. Due to this Sankranti, probably due to his writing, a special revolution came in the field of literature and heralded a new era. In childhood, Fakirmohan was brought up by an old grandfather after his father and mother died prematurely. His name was Brijmohan in childhood. But by decorating the fatherless mother of a grandson in a fakir, her life was supported by a mourning-sainted father. Subsequently, Brajmohan Senapati became acquainted with the name of ‘Fakirmohan Senapati‘.

In infancy, fakir Mohan deserved bhagavat-pity and also possesses extraordinary talent, being estranged from fatherless in puberty, wife-inferior in puberty, and son at the end of his age. Studying in the village school, he continued his studies in person. From time to time, Baleshwar became headteacher at Mission School. Gradually, he was distinguished by his Saraswat Sadhana. With a view to safeguarding the mother tongue, Odia, he took a pervasive commentary in literature. There were many conflicts and conflicts in his lifetime. But they became obsolete and suffered. Being strong optimistic, he took his own life. His home garden “Shanti-Kanan” in Baleshwar is still visible as a sacred place for literary lovers.

Fakir Mohan had little school education; But with his efforts and strong morale, he had acquired more knowledge in scholarly studies. John Bimes, the Baleshwar of Baleshwar was a great literary figure during British rule. In order to teach them Sanskrit, Bengali, and Odia – Fakirmohan used to discuss the language with BIMS when a learned Pandit of these three languages ​​was required. English knowledge of Fakirmohan was not particularly literary. Nevertheless, something useful was done while doing diwan and management work in the self-taught general knowledge gadgets. Gyanarjan’s ambition distinguished Fakirmohan by making him a great litterateur. Fakir Mohan Senapati is famous by the name “Vyasakavi” for translating Mahamuni Vyasa-authored Sanskrit ‘Mahabharata’ text into Odia. He has also written books of Ramayana, Gita, Upanishads, etc. He has been popular as a storyteller, novelist, poet, and translator.

Fakir Mohan Senapati is the Thomas Hardy of Odisha described by Mayadhar Mansingh. While the three novels, “Chha maana Atha Guntha, Mamu” and ‘Lachhama‘. One autobiography in Odia that name is, “Atma Jeebana Charita”.

His written first Odia story in 1998 name is Rebati and other stories are  “Patent Medicine”, “Daka Munshi”, “Adharma Bitta” etc. One short story’s name is “galpa swalpa-1 and 2″.