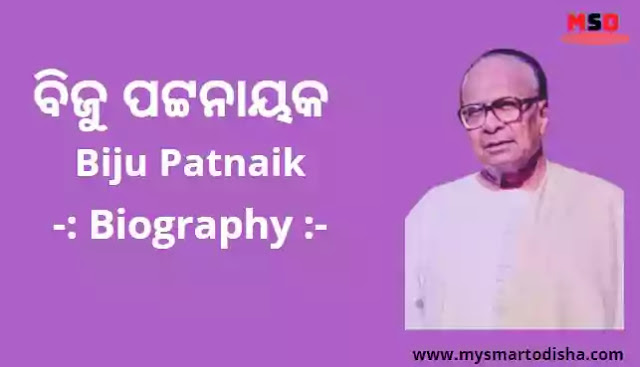 Bijayananda Patnaik (born 5 March 1916 – died 17 April 1997), better known in India as Biju Patnaik. There have been many such leaders in Indian political history, who have made an appearance as an ideal leader by their image. One of such leaders was the former Chief Minister of Odisha and the quiet “hero” of Indian politics. Biju Patnaik.

Bijayananda Patnaik is known as Biju Patnaik. Apart from a politician, he was an aeronautical engineer, navigator, industrialist, freedom fighter, and pilot. Above all, he is known as an unprecedented personality. Napoleon was his inspiration and Biju followed in his footsteps. Biju Patnaik was adept at encouraging people and winning trust.

He spoke effectively with the people and was able to convey his ideas properly to the public. He became a noted politician and social activist due to his strong will and sacrifice. He actively participated in the freedom struggle and became an ideal personality for the people of Orissa.

Biju Patnaik was born on 5 March 1916 in Cuttack, Odisha. His father’s name was the late Lakshminarayan Patnaik and his mother’s name was Ashalata Devi. His father was a leading member of the Oriya movement and a well-known nationalist. He had two brothers and a sister. He completed his primary education at Mission Primary School and Mission Christ Collegiate Cuttack.

In 1927 he went to Ravenshaw School, where Netaji Subhash Chandra Bose also studied at one time. He was a talented player during his college days and led the university’s football, hockey, and athletics team. He was a sports champion for three consecutive years. He dropped out midway to train for pilots at Delhi Flying Club and Aeronautic Training Institute of India.

Since childhood, he was interested in flying airplanes. He thus became an eminent pilot and navigator. Biju Patnaik joined Indian National Airways and became a pilot. He was the head of the Air Transport Command during the 1940–42 struggle for independence.

Biju Patnaik was greatly influenced by Mahatma Gandhi. He participated in the Quit India Movement and also served a two-year prison sentence in 1943. He was accused of transporting freedom fighters to a secret location on his plane. When the Second World War began, he joined the Royal Indian Air Force. He also played an important role in Indonesia’s independence movement.

Under the guidance of Pandit Jawaharlal Nehru, he helped liberate the people of Indonesia from the clutches of the Dutch rulers. On 23 March 1947, Pandit Nehru also invited Biju Patnaik to participate in the first Inter Asia Conference of 22 Asian countries. Prime Minister of Indonesia Sultan Sajahir was also invited to this conference.

Pandit Nehru relied on Biju Patnaik, so he asked Prime Minister Sultan Sajahir to ensure his arrival safely and Biju Patnaik carried out his responsibility well. After this, his image became that of a hero among the people of Indonesia.

In the year 1946, Biju was elected from the North Cuttack assembly constituency and reached the Vidhan Sabha. From 1961 to 1963 he served as the Chief Minister of Odisha.

To encourage scientists from all over the world, he founded the Kalinga Foundation Trust in 1952 and initiated the Kalinga Prize, which is awarded by UNESCO for outstanding work in the field of science. In addition, he made a major contribution to the construction of the Paradip Port.

The government of Indonesia honored him with the highest civilian honor, the “Bhoomiputra”. The award was given for his bravery and courageous work. In 1996, on the occasion of the 50th anniversary of Indonesia’s independence, he was awarded the highest national award ‘Bintang Jasu Utama’.

Biju Patnaik died on 17 April 1997 due to heart and respiratory illness.

1946: Elected to the Orissa Legislative Assembly

1977: Exempted from jail and elected Member of Parliament

1977-79: Became Minister of Steel and Mining at the Center

1997: Died due to heart and respiratory disease